Words and Photos by: Jimmy Mak

The 2018 STI has been slightly refreshed. With revised front bumper and some interior upgrades, let’s take a look how the STI stacks up in 2018.

The overall concept has remained the same for generations, a big wing out back sedan with 4doors, a boxer 4 Cylinder that sends power to all four wheels via Subaru’s excellent symmetrical all-wheel drive. Like the past years, a hatchback is not offered which has made some fans a bit upset especially now with the new generation of hot hatc rivals.

A new set of 19″ wheels are a nice visual upgrade, available on the sport and higher model trims they provide a nice contrast on the lime green brake calipers. However, 19″ wheels do look a tad big for this body, the standard 18″s that’s offered on the base model does look more fitting and needless to say cheaper tires as as well.

Standard now is a set of LED headlamps that swivel with the direction of the front wheels allowing for more light in the direction of travel. A great addition since the STI can switch directions quickly, so quick, in fact, the lights can’t keep up in quicker switchbacks. 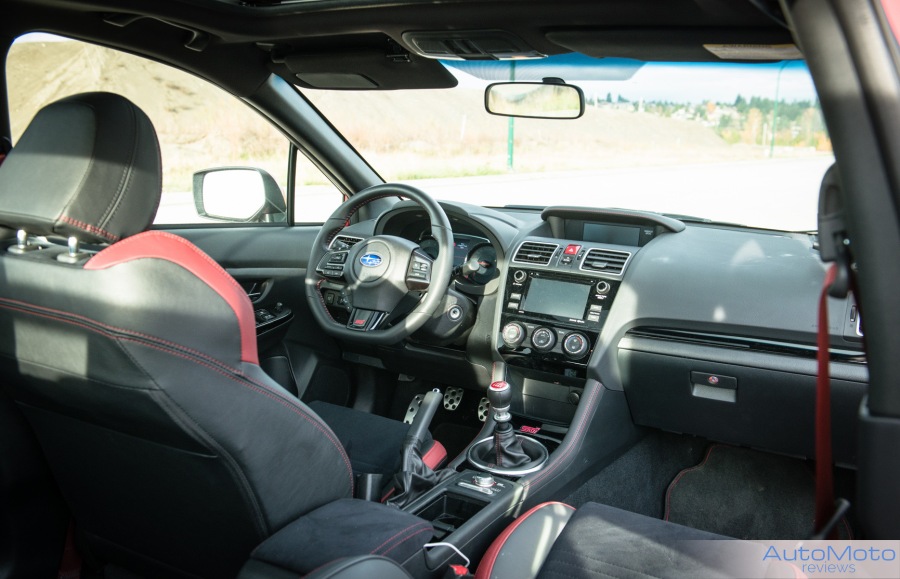 Inside of the STI is more of the same. While the Impreza gets an all-new platform for 2017, the STI has to make due with the same hard plastics found in the older generation. It’s not too special in here but everything is functional, the switchgear and controls are where you would naturally find them nothing is out of place or awkward. 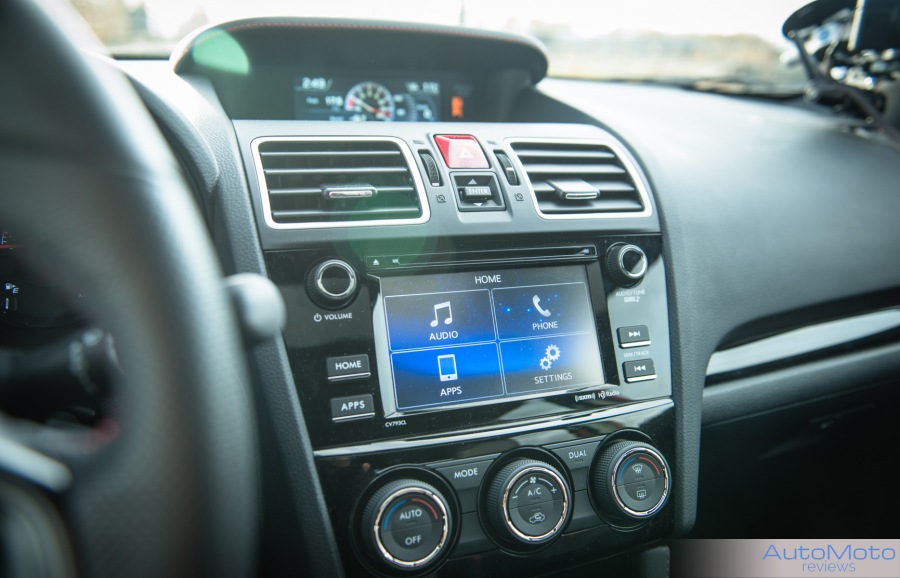 The infotainment system is pretty disappointing, being slow and sluggish it doesn’t respond well comparing to newer offerings from Honda or Ford. But it’s simple layout and minimalistic button layout does make it easy to use. It’s sad to see Subaru hasn’t pulled the excellent systems found in the newer Subarus.

Above the center stack, there’s this little display that shows vitals, boost levels as well as fuel consumption. Being a bit further away in the dash it’s harder to see than liked, so it’s more of a display piece than functional gauge. Although it is cool to see the maximum pressure generated by the Turbo.

Without the Tech package, the seats are not the Recaro units but they still offer plenty of grip. With leather bolsters and Alcantara inserts the seats do offer plenty of support, best yet they’re heated. Great for the winter months of hooning… I mean regular driving.

The back seats are flat with high seatback, headroom is adequate and legroom is plentiful even with bigger front seat backs. And new for 2018 a center armrest with cup holders, oh the luxury.

Where other vehicles have proximity keys this STI still uses the good ole fashion key fob to unlock and start the car. Unless the tech package is checked off this is the key that will start a 2018 vehicle priced at $42,000.

Powering the STI is the same ole EJ257 with 305hp that’s sent to all four wheels thru a clunky but short shifter. Power delivery is smooth and even in the entire powerband. Above 3000 rpm when boost is in full, the power is easily put down with no drama. But with no drama, even in Sport sharp mode power felt a bit lacking. With the new big hitters such as the Type-R, the STI just seems too tame in the current world. 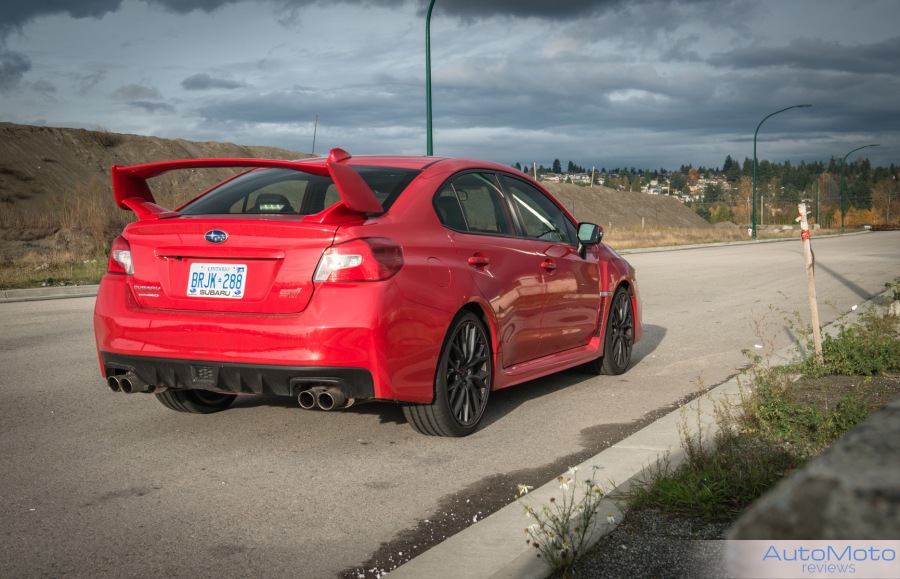 Driving around town the STI feels a bit harsh. The suspension is more tuned for a sporty feel and it creates a harder ride for its passengers. The ride is not solid in any way, there’s still body movement and suspension travel but it’s not as soft as a Golf-R but it’s also nowhere near as harsh as the Focus RS. It’s a happy medium not found in some competitors.

Pushing the car a bit harder will show the STI’s roots. The AWD system is now all digitally controlled for faster response, in auto, it pushes 41% of the torque to the front axle which has a helical LSD and 59% to the back with the Torsen LSD. Allowing for a bit more slip and agility out of corners and this is where the STI shines. It’s able to put down all of this power even at low-speed corners with precision that makes the STI such a joy to drive.

In terms of using the STI day-to-day, it’s decently practical. Behind the rear seats there is a large trunk but with a higher load floor due to AWD bits underneath the floor. 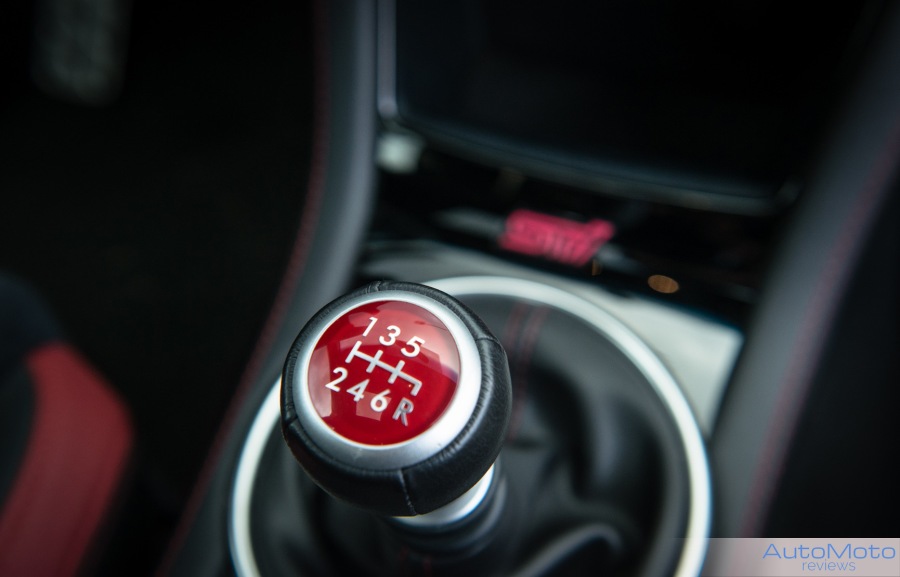 Overall the STI is an old dog without any new tricks. In this day and age with plenty of big hitters, the STI is getting harder and harder to recommend. However, With such a big fan base the STI will continue on and triumph with no issues. The car itself is still amazing to drive, the powerband is linear which makes it easier to drive than some of its competitors and with the newer styling it looks amazing. But there are better options out there for the same if not similar price point.

Big thanks to Subaru Canada for allowing me to drive the STI.