The Nismo name has been around since 1984 but it wasn’t until recently where Nissan has stuck that badge onto it’s more conventional cars. First, it was modifying the Juke to create the 215hp Nismo Juke and with some very pretty red accents that resemble the bigger brother 370z and GTR alike. But now Nissan has stuck that same badge on to it’s smallest sedan the Sentra just to spice things up a bit. 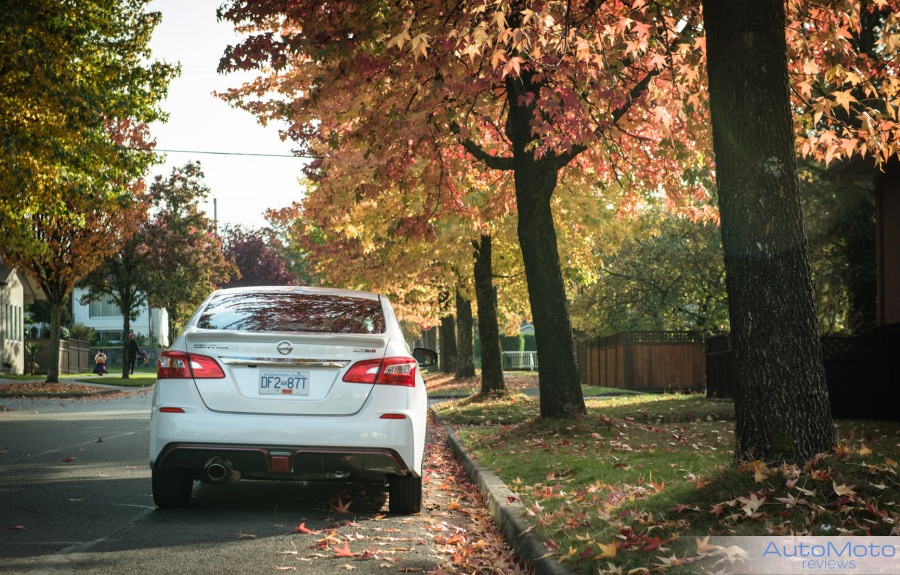 The Sentra had a few sporty variant in the past, the SER Spec-V was enjoyed by many during the sport compact craze. But now the Sentra has grown up and gained a few pounds but it still rocks the looks of it’s Nismo cousins.

RED ACCENTS! It really does scream at you at all corners. The front, rear, and sides have been revised to add the Nismo Curvy splitters and other aero pieces to create a very sporty flair. It’s not easy to spice up a relatively boring car such as the Sentra but they did! And I must say it looks fantastic. It’s not overwhelming in any way, there’s no big wing in the back but it gets a little lip edge spoiler to be a bit more covert. 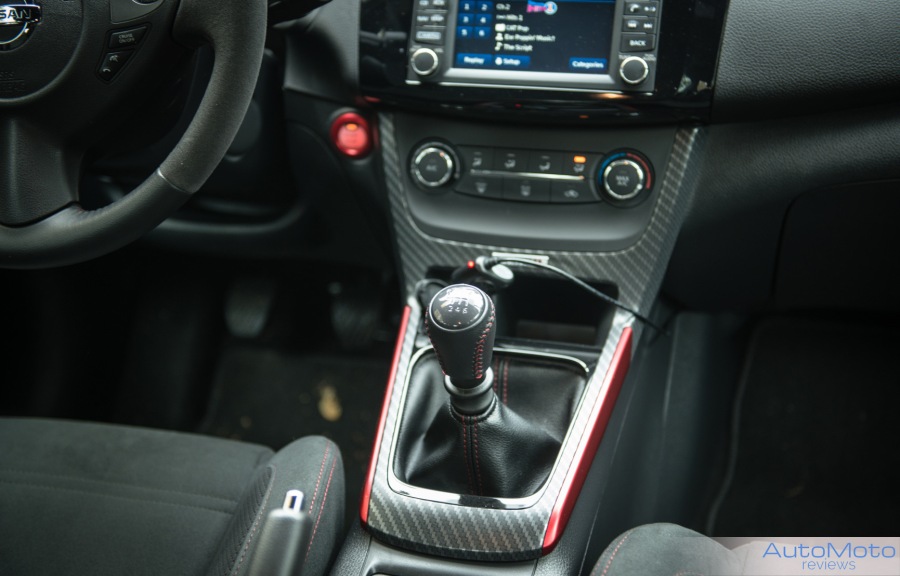 It’s really something to behold. Nissan does do some amazing work with the Nismo add-ons and those 18″ Nismo wheels look spot on. But there are questionable design choices, for example, the F1 inspired brake light mounted low on the rear valence is nothing but a reflector.

Inside the Sentra, it also has been upgraded. First the steering wheel, covered in alcantara and leather it’s an amazing texture to feel and hold but the mixture of material might not be for everyone. Moving down the door cards also have alcantra as well as some faux carbon fibre. This stretches across to the centre stack where more carbon, and piano black plastics can be found. Although the upgrades are nice it can’t hide how old this platform really is. The Sentra’s outdated infotainment system is seriously lacking, but it does feature a half decent navigation system as well as Bluetooth and USB connectivity. But in this day and age people are looking for more and for that, and the Sentra does fall short.

For the front passengers, there’s nicely bolstered heated sports seats that hug and grip the occupants. Although a bit hard for some these seats does make the drive that much more entertaining. Best yet, they feature a wide base so unlike the Focus ST where a person with a bigger frame would be uncomfortable this made it easier for people of all sizes.

As for the back, there’s upgraded upholstery but that’s about it. The seats sit up high and are harder than liked. Passenger back here will be hard pressed to find comfort in the seats themselves. However, there is plenty of room for their legs as the Sentra’s wheelbase is quite long for a compact vehicle.

Well, that depends. In traffic, it’s no more exciting than a regular Sentra. The suspension is stiff so bumps and jolts translate to jerkiness that can be felt right through the sports seats. Steering is light but can be weighed up with the press of the Sport button so traffic manoeuvring isn’t bad. But in day to day traffic it just doesn’t feel special.

BUT! take it out on the backroads the Nismo does show it’s inner traits. Steering is quite direct and linear, point and the front end will go exactly where it’s placed. It’s very eager to move, big thanks to the stiffer suspension the car feels planted in the corners. Sadly the rear suspension is still a torsion-bar setup rather than clever muti-links but it makes do. With small bumps, it can unsettle the car for just a second, but it’s able to continue on its track with little to no drama. Pushing the car a bit harder and understeer can be a trait, which is to be expected in a front heavy, front wheel drive vehicle. But the best part is this little Nismo can dance. Balancing the understeer is lift-off oversteer, at higher speeds during lift, the engine brake can initiate a bit of oversteer to tighten the line. Now before anyone says this is dangerous, stability control cannot be fully disabled. So no matter how hard the Sentra is driven, the electronic nanny’s got your back. This makes the car just that much more exciting to drive than the box stardard model. 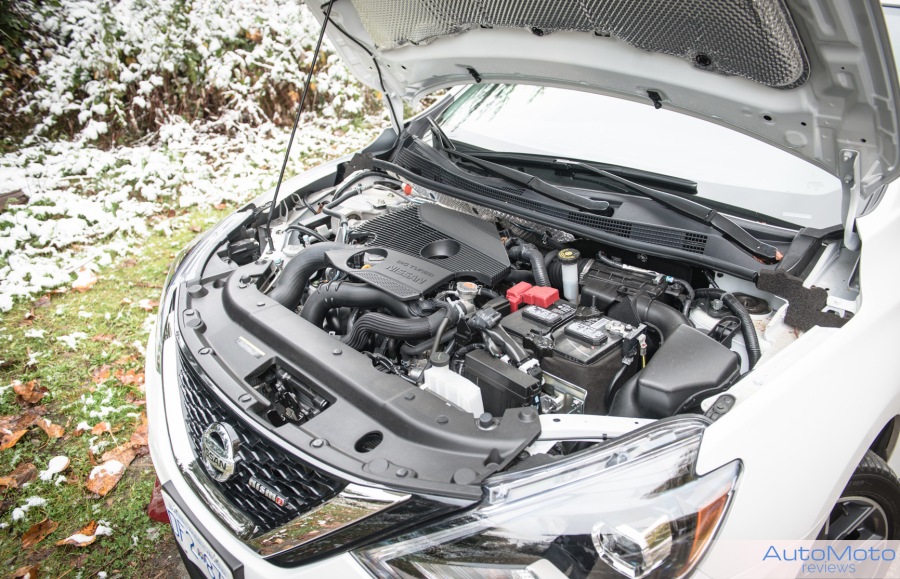 This little power plant is very similar to the Juke, the 1.6L puts out 188hp and 177lb-ft of torque. Comparing to its rivals such as the Civic Si and the Elantra Sport, the Sentra is down in power. But numbers are one thing how it delivers the power is another. Unlike the others, the Sentra has a very linear power band. Full torque comes in at 1600rpm, which is just barely above idle so power is always there, it lacks the turbo dip that some others suffer from. Away from stops and on the highway, no matter where the revs are there’s always power to accelerate smoothly. 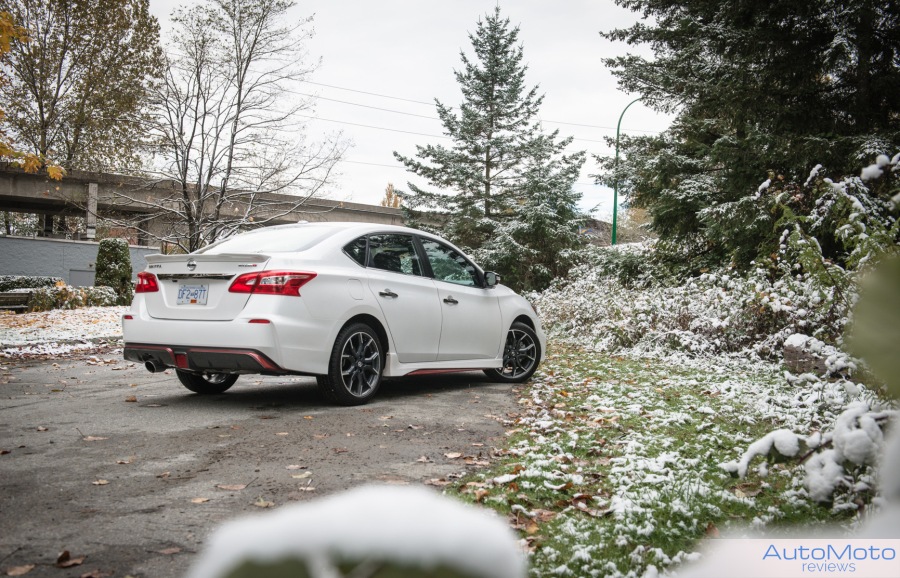 Attaching the engine to the ground is a 6-speed manual with stiffer and mushier shifter than liked but paired that with a decent clutch feel, it’s actually a decent combo. Unlike some others where the clutch is light with no feedback, the Sentra’s clutch gave the car a bit more character as it’s sprung just a bit heavier than regular econoboxes. Sadly all that power might be wasted as the Sentra doesn’t have an LSD anymore. So unlike the past, it’s only able to put the power down to a single front wheel, or at least traction control intervenes. 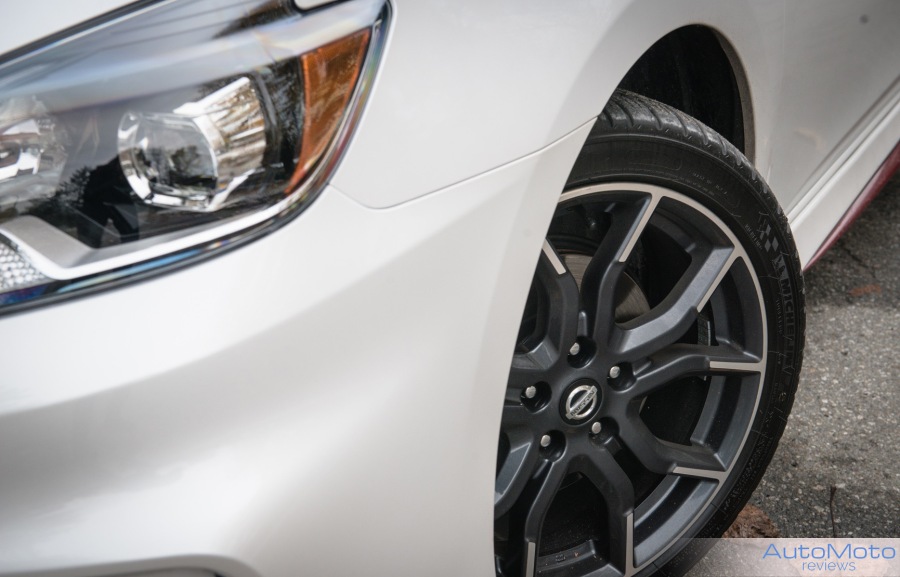 Overall the Sentra is a fun car, a terrific visual upgrade from the SR trim that’s available. The only problem a good car just isn’t good enough in the segment anymore. With the new Civic SI emerging in the market the Sentra desperately needs an update. While it’s little engine can try it’s best to keep up,  the lack of an LSD denies the car to put the power to the ground in tighter turns and twists. And inside, the Sentra just feels low rent in 2017. However, priced at $27,598 with the $300 option of  3 coat paint, it’s reasonable being about $3000 less than the comparable Civic SI. Lastly, for those who have yet to learn how to master three pedals, Nissan has generously added a CVT automatic has an option for those who are a looking for more of a lazy driving experience.

Huge thanks to Nissan Canada for the vehicle.