Introducing the brand new Infiniti QX50, no longer an elongated EX35 with it’s roots to the original G35. This brand new QX50 is here to make a bold statement by not only its looks but the tech inside as well.

First off looks, the overall feel of the exterior is a lot more upscale than previous. With swoops and curves that are not found in other vehicles. Closer to the new RDX the QX50 has grown in size to a more family appropriate vehicle. From the front, the Infiniti cooperate grill cannot be mistaken for anyone else in the market. Flanked by a beautiful set of optional LED headlights the front end is different enough to stand out but not in your face enough to offend anyone. The sides of the QX50 reminds me of the Audi Q5, and that’s never a bad thing. There are a few lines throughout the vehicle that follow Infiniti’s design language especially the kinked rear 3/4 window. 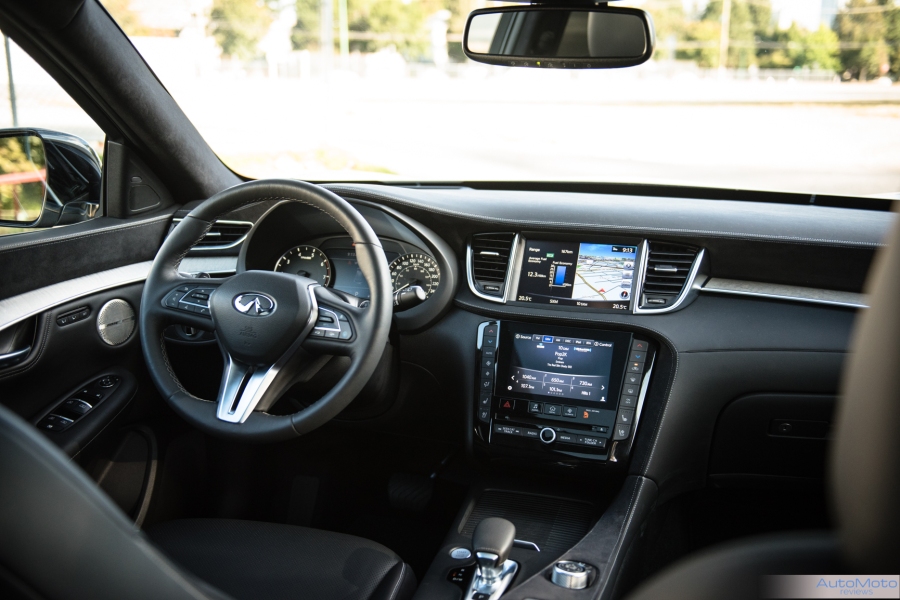 Moving onto the inside the QX50 is truly upscale. The mixture of leather, wood, and suede makes its way throughout the cabin. The dash is nicely padded with contrasting stitching that runs right across the dash splitting the upper and lower dash.

For the driver, the cluster is an excellent digital display with analog dials off to the side. The cluster shows all the needed information including but not limited to fuel economy, boost gauge as well as media controls.

The centre stack is aimed slightly towards the driver with dual displays. The top one is a touchscreen that can be controlled by the screen itself, the buttons on the steering wheel as well a knob on the centre console which may confuse some. The lower screen is controlled only with touch, and for some reason, it’s glossy compared to the matte display up top. The two displays also differ in the font as well, it looks a bit out of place. The bottom screen with its flanked by climate control buttons that reminds me of the Acura TL from 2004, while different it’s a very similar layout which allows for quick access to the change temperature.

For passenger comfort, the QX50 is just as good as the best in the class. Seats are soft and comfortable with a wide seat back and bottoms giving occupants a luxurious plush ride. For the front passengers, there are heated and ventilated seats on this trim, while the back seats lack any options.

Driving the QX50 is plush, Infiniti has gone with the softer riding suspension rather than stiffer sportier ride. It’s quite nice, bumps and imperfections are silenced in the hushed cabin. Power comes from an innovative engine.  The 2.0L turbocharged four-cylinder is unlike any other, with variable compression it’s the first from any automaker. The engine can range from a low of 8.0:1 to a high of 14.0:1 compression allowing for maximum efficiency or max power. Lowering the compression at higher RPM allows the turbo to have a maximum boost of 22psi without any issues. Power comes in strong, with a great amount of torque at lower rpm. Power is rated at 268 hp @ 5600 rpm and torque comes in at 280 lb-ft @ 1600 rpm. While power is strong, it does take a bit to get there. The combination of the CVT, variable compression and the turbo means smashing the throttle doesn’t always translate to forward momentum. While the overall vehicle is strong, the CVT has always been a low point in any Nissan/Infiniti vehicle. Infiniti has done well with the tuning however it’s nowhere near as good as a standard automatic transmission.

The reason why Infiniti has gone through all this work to make this engine was for efficiency. Rated at 10L/100km in the city and 7.8L/100km on the highway, it was hard to reach those numbers. Averaging 12L/100km during my week it is better than other vehicles of the same size but not by a wide margin which leads to why did they bother in the first place? Mazda has high compression engines strapped with turbos already, so it’s hard to say exactly why Infiniti has gone through all that trouble in research and development to accomplish this.

In either case, the QX50 is one of the best that Infiniti has come out within a while. No longer on an older chassis and with one of the best fit and finish it’s sure to stand out from the rest.