The GMC Terrain is brand new for 2018; now on its 2nd generation, it’s smaller than it’s predecessor while maintaining a versatile and practical interior. With more modest dimensions, it fits nicely in the ever-growing compact market. 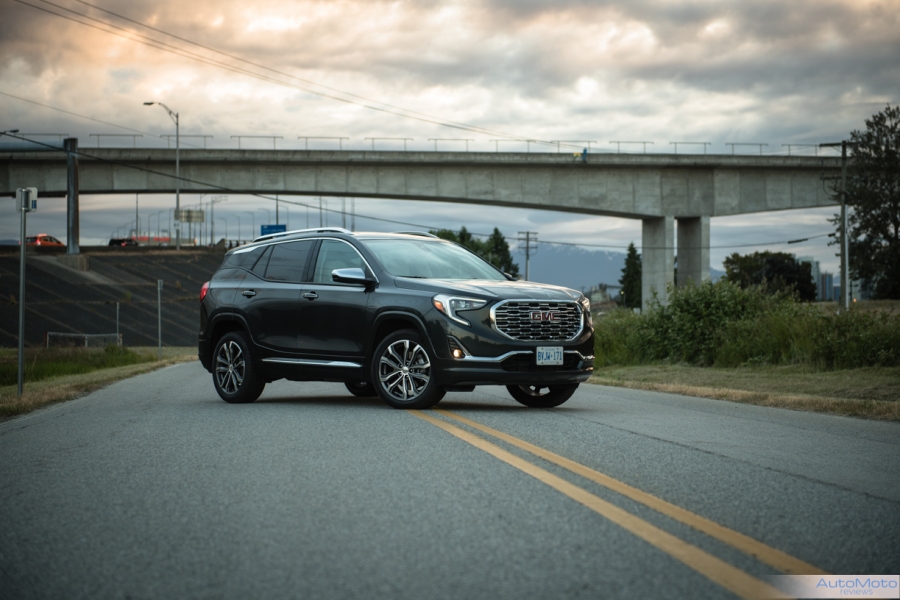 What’s unique on the Denali trim is it doesn’t fit in any category due to its price tag of $47,000 with all the options equipped on this tester it’s priced higher than it’s competitors like the Ford Escape at $41,000 even when fully optioned out. 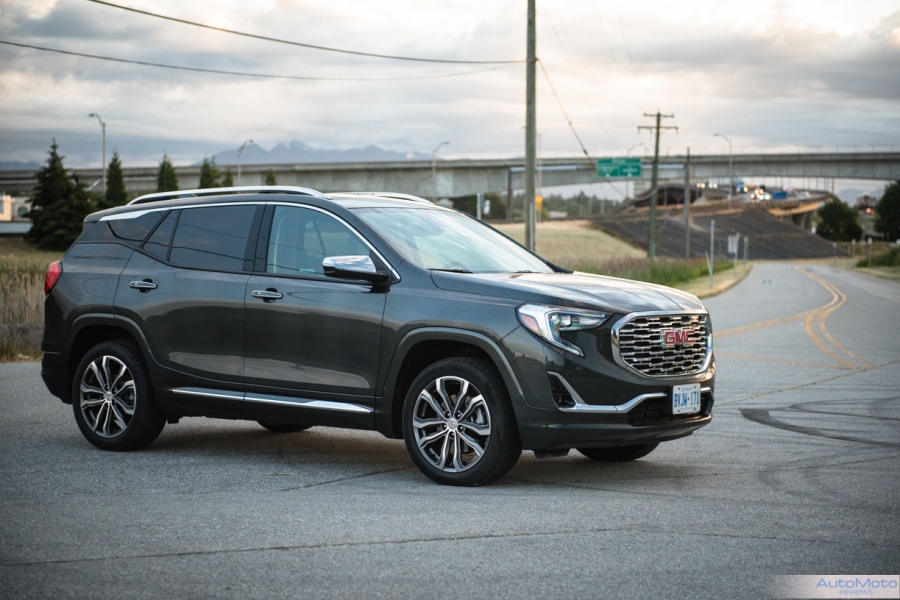 With that said there are a few things where the Terrain does stand out, first off let’s go over the exterior. The front LED headlights are unique with a C-shape daytime running lights integrated neatly within them, even the rear tails mimic the look. Something else that stands out is the amount of bling on this, check out this front grill. As it is a Denali, it’s defiantly blinged up close to Cadillac standards. A weird and maybe awkward exterior trait would be this window here behind the rear passenger door. It’s small and doesn’t offer the visibility that’s needed. The Cousin to the Terrain, the Chevy Equinox, features a full window here, and it makes more sense and allows for better visibility especially when parking. 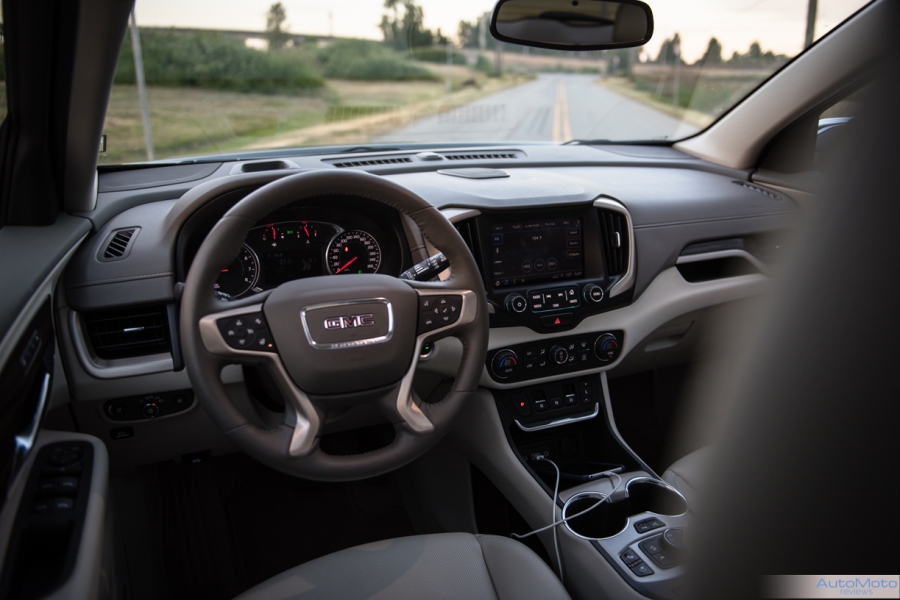 Let’s move on to the inside, interior of the terrain looks pretty sweet. There are leather, aluminum, and even some fake wood in here. 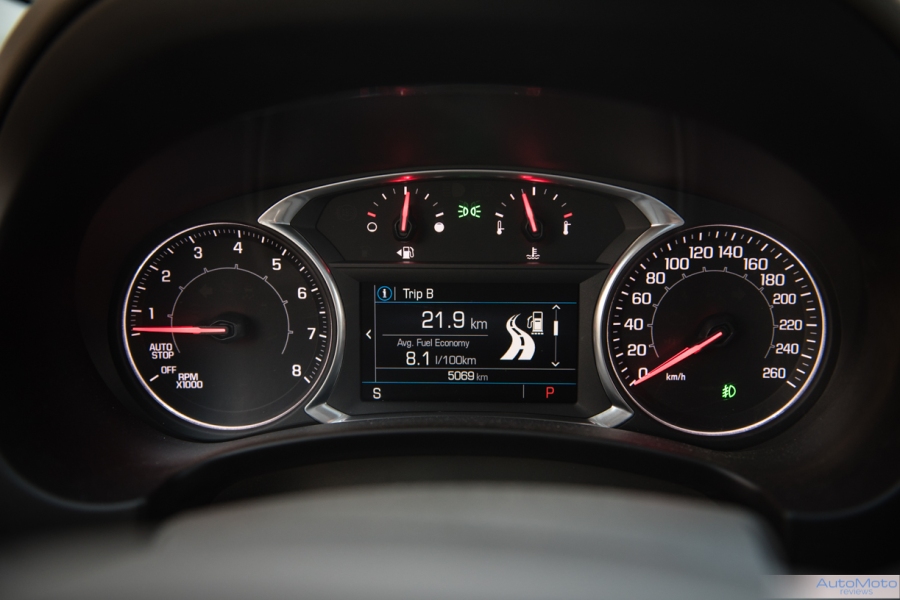 The cluster, it’s simple and effective it doesn’t seem to necessarily stand out in the days where some manufacturers have replaced tradition analog dials with full digital screens, but there is a small display that shows the driver some information on the vehicle like speed, fuel consumption, and even tire pressure. The centre stack looks good although the primary display is angled more upright than I like. This seems to be the norm in a lot of later GM vehicles. But I must say the infotainment system is one of the better systems in the industry. 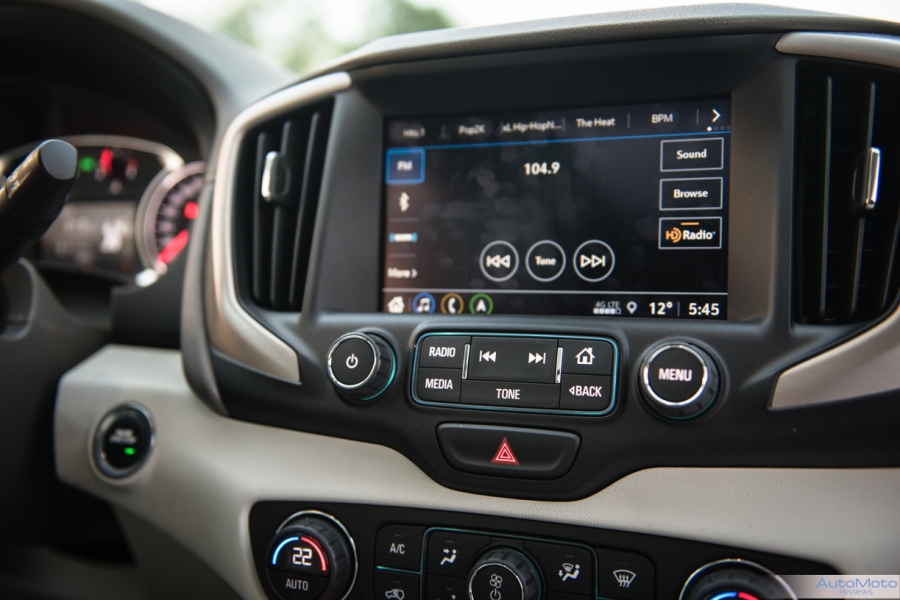 The way it works and looks remind me of the Ford’s Sync system. It’s quick and allows both Apple Carplay and Android Auto which is a nice touch. It’s also relatively high resolution which makes navigating the menu and maps very pleasing to the eyes. Something I do like about GMC is the forward thinking of their team. The front occupants have access to two USB ports in the console and two more by the shifter. One of them is a USB-C great for newer devices. 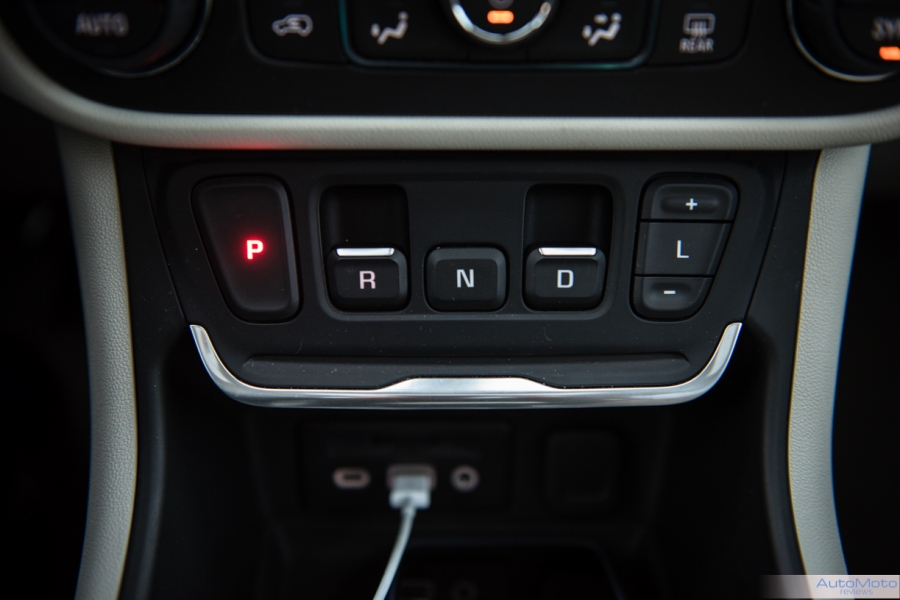 If there’s anything odd in this cabin is the use of buttons. There are quite a few buttons throughout the dash, GMC even incorporated the shifter as buttons. Check them out! More and more manufacturers are going with push button shifters as it takes up less space in the centre console these makes sense, and it’s well placed down low on the console. An oddity would be using the “L” for low gear allowing for manual shifting with the plus and minus, but it’s not where you would typically find them. In most vehicles it’s generally behind the steering wheel, however in the Terrain the buttons back there are to change the volume and track instead. 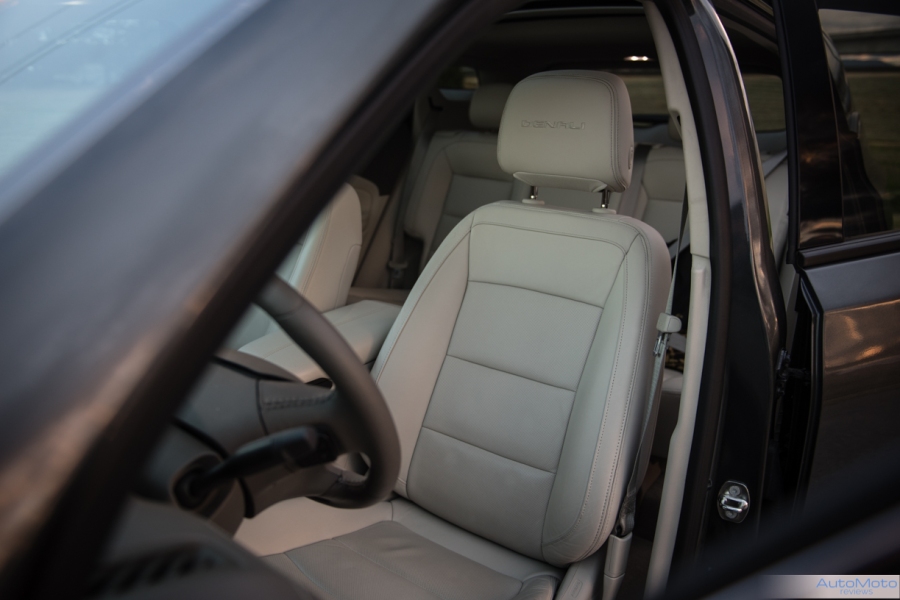 The rest of the cabin is pretty nice, the front seats in this tester are lined with leather that’s heated as well as ventilated there’s even a heated steering wheel for those colder winter months. The driver seat is fully power-operated while the passenger is not as the seat back is manual. The reason for this is a neat feature whereby pulling the lever on the side it folds the seats completely flat allowing for longer items to stow within the cabin. 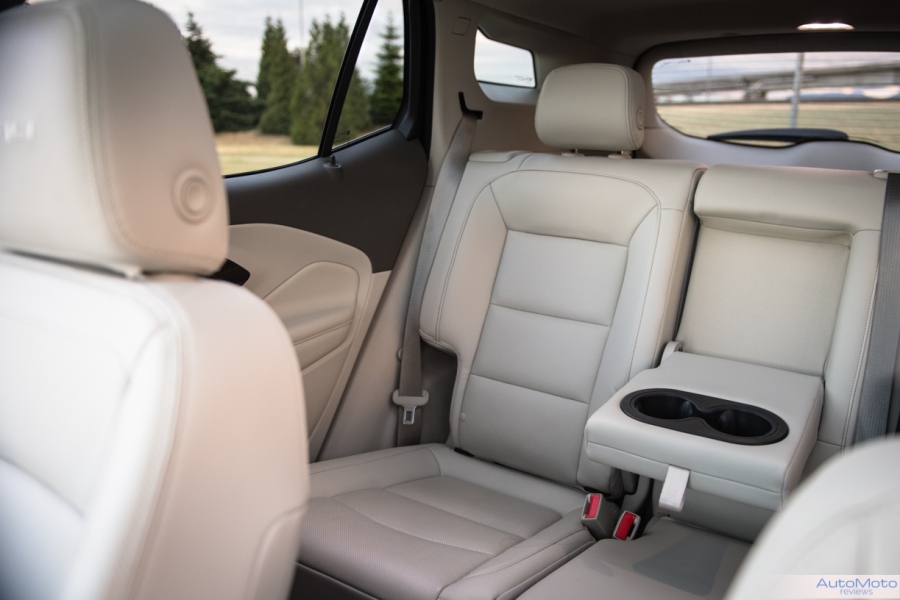 The rear seats are just as soft as the front lined with leather, and they’re also heated. When needed they can fold completely flat to allow cargo to pass thru with ease. Rear passengers are also treated to two USB ports as well as a standard household outlet allowing for laptops and other small appliances to be used. 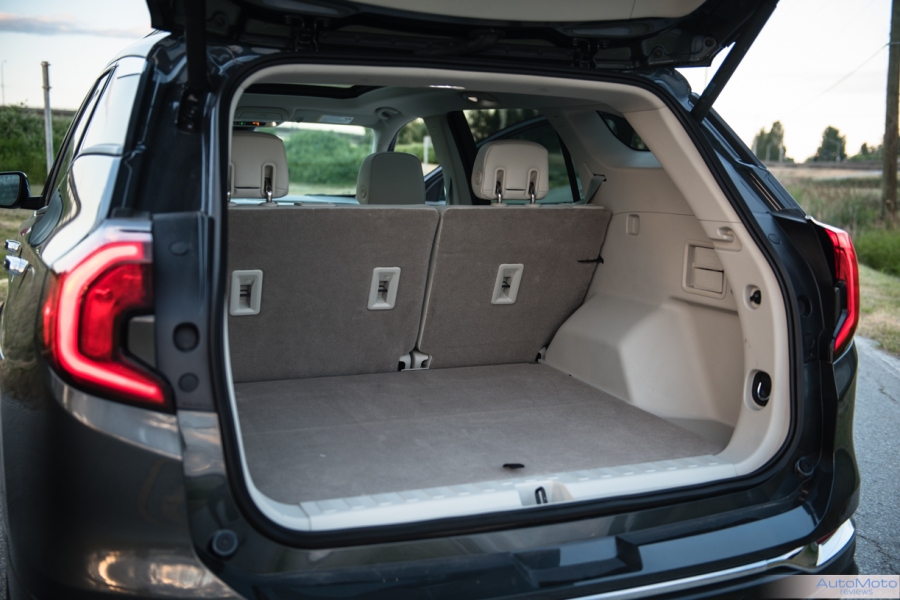 Behind the rear seats, you’ll find a rather small capacity trunk, at 30 cu ft. It’s about 4 smaller than the Escape. 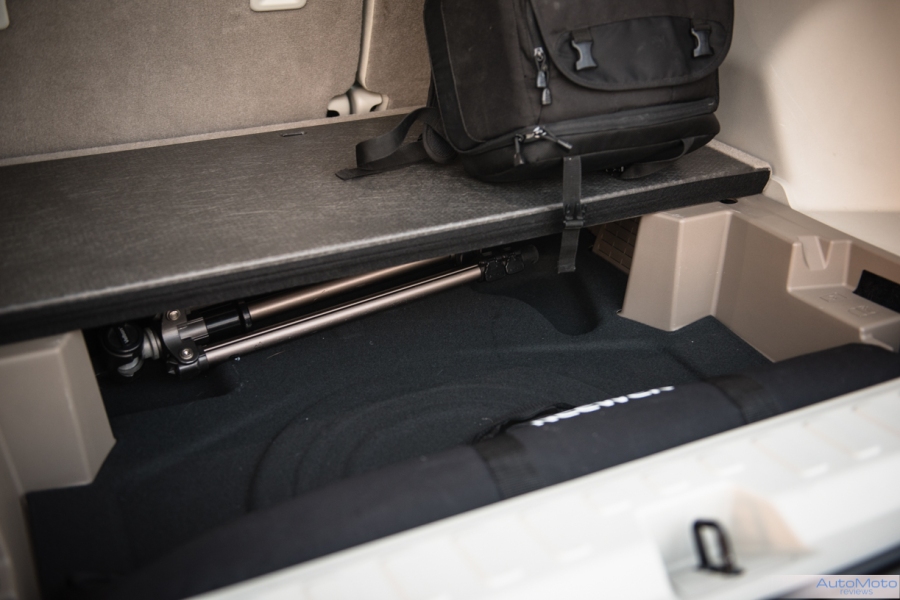 However, there is an under-floor storage area that is hidden from view which does boost capacity. There is even an automated lift gate to get items in and out easier. To activate the liftgate is a simple kick under the rear bumper, inside the cabin or via fob. 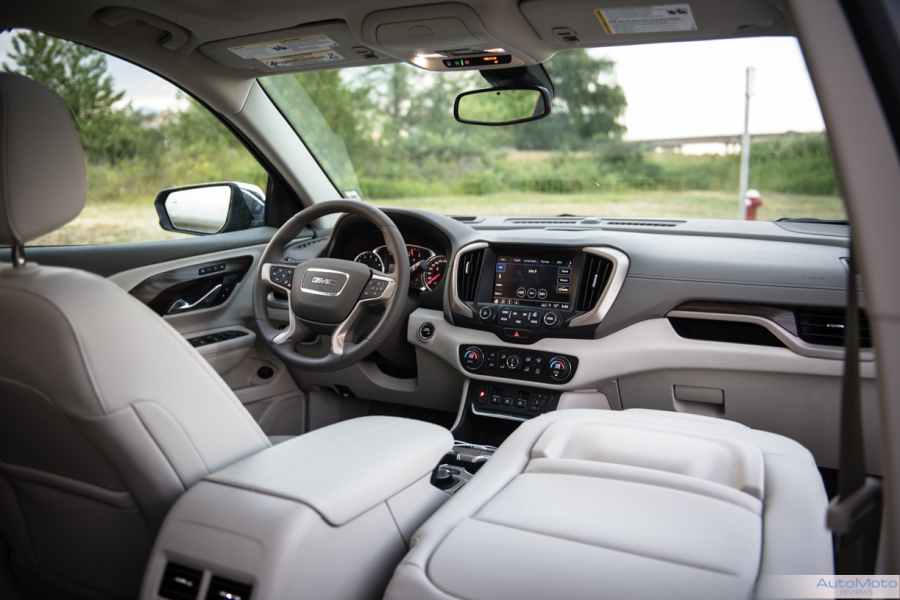 Driving the Terrain is soft and comfortable, the Denali has something GMC likes to call “Enhanced ride.” The suspension is soft, but it’s not sprung in a way it bounces like an old Cadillac it does wallow a bit, but for day to day drive, it’s composed enough to feel confident. For those looking for a sportier experience, check out the likes of the Mazda CX-5. 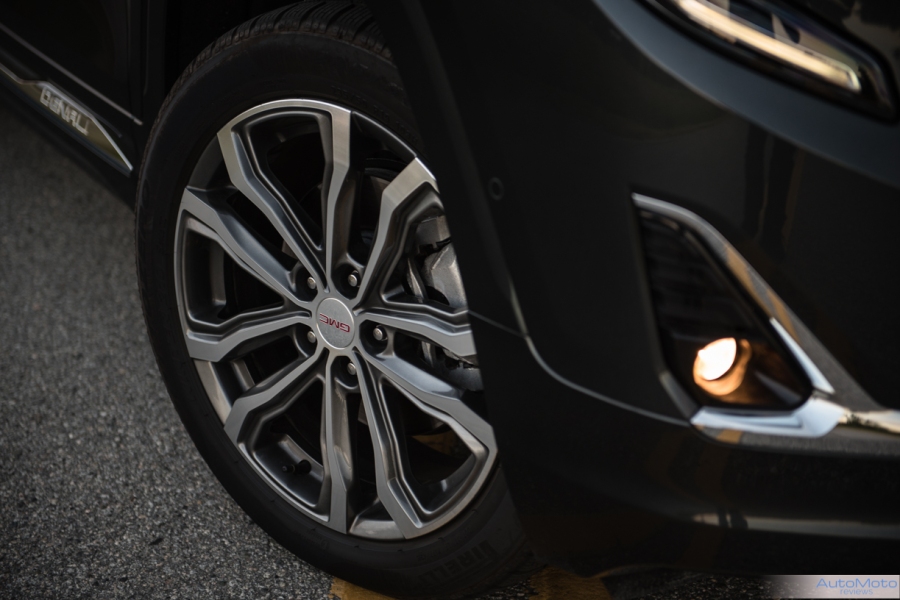 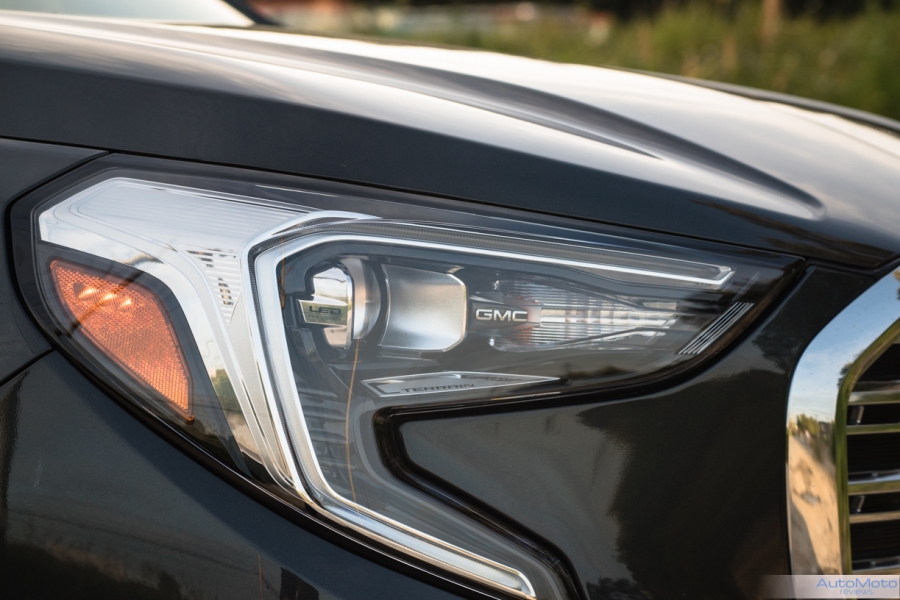 The engine is paired with a 9-speed auto, a brand new transmission for GM products and it works exceptionally well. It keeps the revs nice and low for better fuel consumption, and it shifts quietly and smoothly. Putting the foot down the Terrain takes a second to row down a few gears and scoots along using the board powerband to pull the vehicle up to speed. Inside the cabin noise is kept to a minimum allowing the start/ stop feature to operate quietly in the back with minimum intrusion. 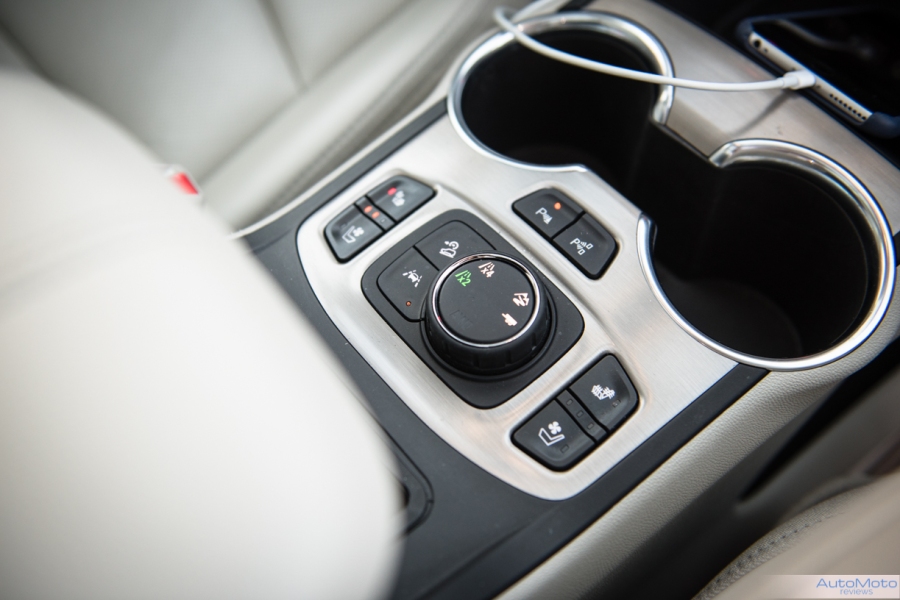 For those who want to be a bit more adventurous, the Terrain even has selectable all-wheel-drive. While driving around town the vehicle can be kept at 2WD to save fuel, but when the going gets tough, the selector in the centre console can switch on the fly adjusting the engine and transmission to deal with trickier scenarios. 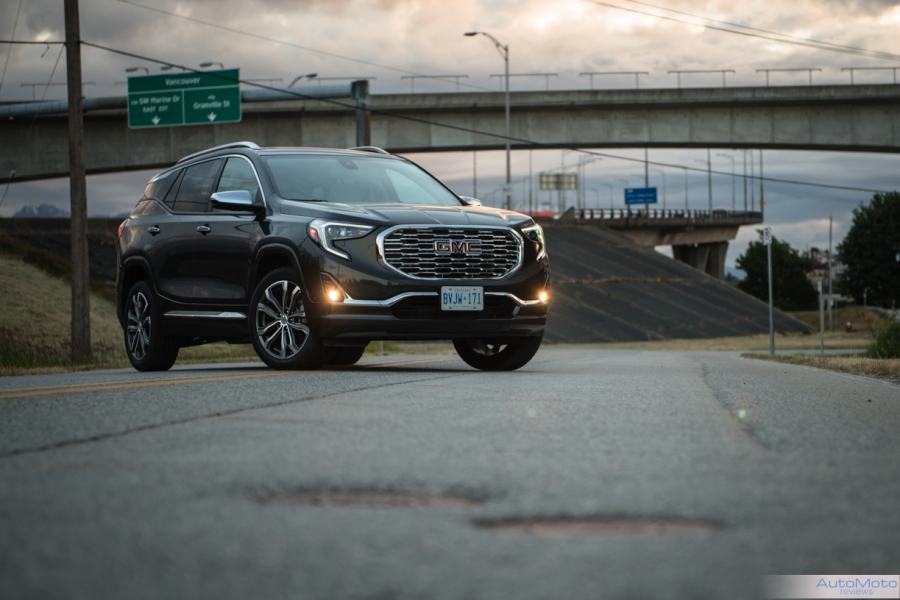 Since this Denali has all the options checked off, it also includes some safety features like low speed forward braking, collision alert and lane keep assist. What’s weird is the Terrain cannot be optioned with radar-guided cruise control, those of you which may be interested in this feature would have to move up to the mid-size Acadia. But, to help with parking, this Denali can park itself, and it has a 360-degree camera to help look around the vehicle. Something I did like in the Terrain is the use of a vibration motor in the seat to alert the driver of upcoming warnings or dangers instead of an audible alert. It even works with rear cross traffic alert vibrating the side the threat is coming from. 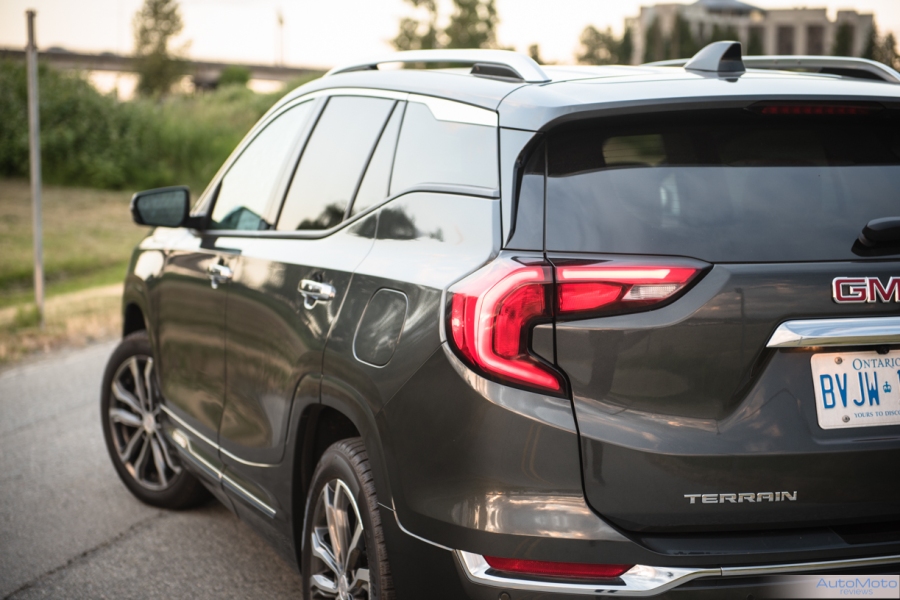 Overall the Terrain is a fair vehicle. Some of the interior pieces are chunky and can feel a bit cheap, it may not be a luxury alternative to higher-end brands, but the middle SLT trim gives you users most of the features that are necessary without the luxury features found in the Denali like LED headlamps, and all the chrome bits. The Denali trim is hard to recommend simply due to the price point, even with all the amenities it’s hard to justify the high price. 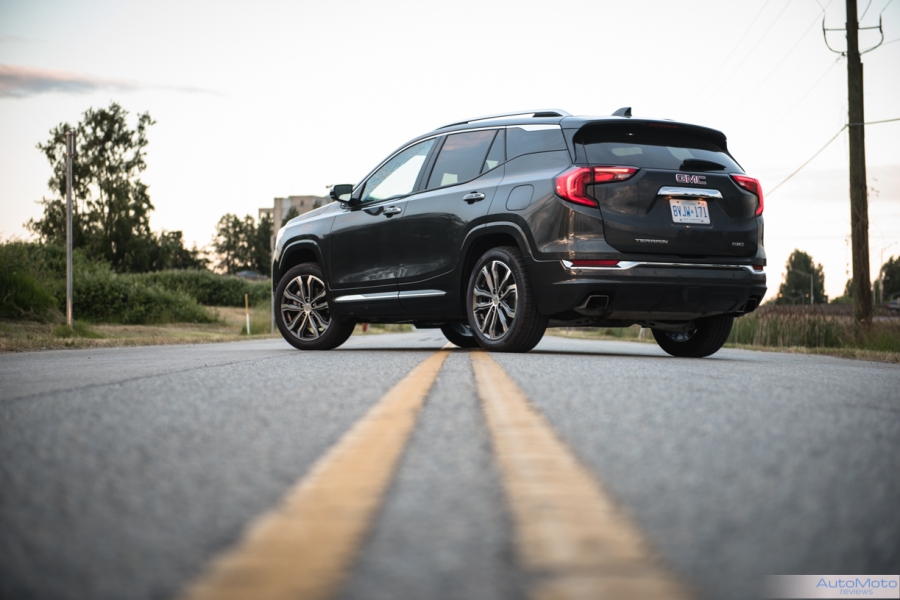 Thank you to GMC Canada for providing the vehicle.