While the Q50 has been out for a while this engine alone is somewhat of a marvel and that’s enough for us to take a look a bit deeper.

This model isn’t the blazing hot 400hp “Red” variant but the more sub-due 300hp version. The 3L twin-turbo V6 in the Q50 was introduced back in 2016 as the replacement for the ageing VQ engines used in the G35 and G37. This new engine dubbed the VR30 has roots from the VR38DETT found in the GTR, but there are significant changes to make this engine all-new and keep the fanboys from telling friends they drive a GTR.

With a bore and stroke of 86mm, gear-heads will tie this combo with the ever-popular SR20 engine used in the past as well as the FT86 platform. Unlike most turbocharged cars, the turbos on this engine are not manifold mounted, but instead, they bolt directly onto the cylinder heads. This reduces weight as well as travel distance giving this engine fantastic throttle response and virtually no turbo lag. There’s even a liquid to air intercooler to maximize the efficiency of the overall system. Torque is instant, all 295lb-ft is available between 1500 and 5200rpm, but the force that’s felt would make one think the numbers are much higher. With a total of 300hp at 6400rpm, the engine never seems to run out of breath like a lot of these smaller turbocharged motors.

Other than the fantastic engine, Infiniti engineers have also focused on materials. The inside of the Infiniti is a beautiful place to be with soft-touch materials throughout the cabin. Surrounding the occupants from door to door is soft leather and wood, there’s not a hint of low-end plastics in this cabin.

An area that is a bit dated is the infotainment system. While it works and both touchscreen is capable, it just looks clumsy and doesn’t have the latest smartphone connectivity options. The dual touchscreen is also a bit fussy to use, with the bottom screen houses the media and HVAC control the top is dedicated for navigation, but most of the controls are done via the knob on the centre console.

It’s just not as intuitive as some other systems, but it does work and given time most can get used to after a while of tinkering.

The seats are soft and plenty supportive however in this Luxe trim they sacrifice lateral support for plushness which some may not like. Unlike other compact luxury sedans, these seats are only heated. While features like ventilated seats, not even an available as an option.

Trunk size is rather small with a hump due to the rear axle. There is a pass-through for longer items, but buyers looking to carry a bit more may look elsewhere. 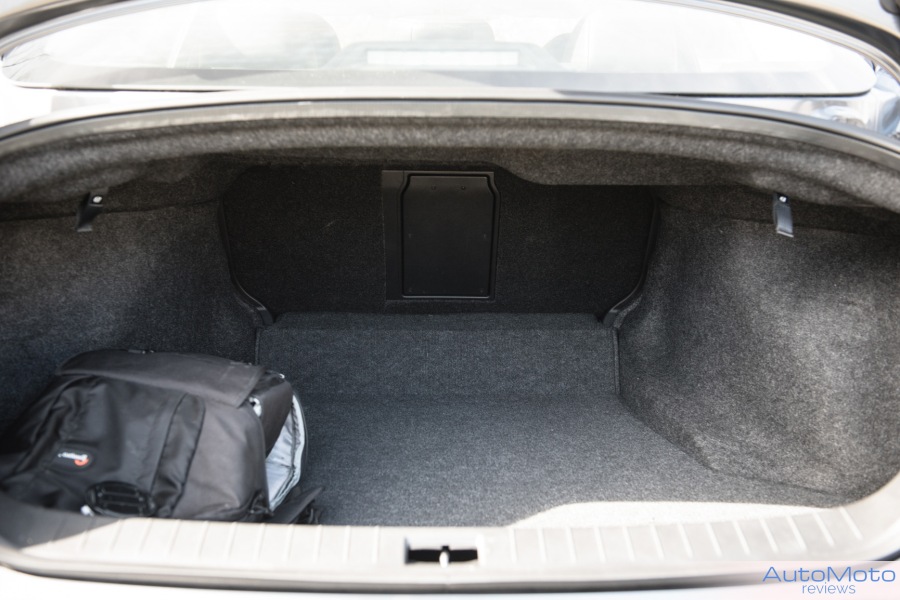 Driving this Q50 is a blast, the engine as said is pure joy. However, at this luxe trim, it more designed for comfort than performance. The rather small 18″ wheels with high sidewalls paired with softer suspension give the Q50 a plush ride that a lot will find enjoyable and comfortable but not engaging. Pushing the Q50 a bit harder and physics take over, the tires will start to squeal and complain leaving enthusiasts wanting more.

For those who can’t be bothered to drive. Infiniti does offer an excellent adaptive cruise control system. With the system activated the vehicle will brake and slow the Q50 to a complete stop without driver intervention. What it can’t do is hold it at a stop, after a few seconds the system will chime and the Q50 will begin to roll forward. Nevertheless, it is one of the better systems available. Able to keep track of upcoming vehicles and slow down as need or when cars pull out it can speed up with moderate throttle without being rushed.

Thank you to Infiniti Canada for providing the Q50.